When it comes to developing sustained success in sports, being physically fit is only half the story.

It’s commonly assumed that any level of success in sport is simply ‘practice makes perfect’; that repetition is all that’s needed. Footballers spend hours playing keepy-uppy, golfers are always on the practice green, and so on. What’s become popular recently, however, is the ‘cohesive coaching’ approach, providing a broader, more encompassing style.

People imagine cohesive coaching is why we see Formula 1 drivers in the gym, or hockey players spending hours in the pool – and while overall fitness is important, being physically fit is only half the story of sporting success.

While diverse training regimes have given sportspeople huge gains, the value of ongoing mental skills development is a critical component of sustained success and should underlie all physical sporting actions. Each kick of a football, pass of a rugby ball or swing of a bat should be based on good decision-making processes. Repetition isn’t enough to guarantee success because it doesn’t account for skilled opponents, cheering crowds or even just the adrenaline of competitive sport.

The mental pressures during sport come from two different places in the brain; the amygdala and the frontal cortex. The amygdala controls ‘fight or flight’ leftover from our ancestors – stimulating the body with adrenaline and sending oxygen rich blood to fire up the muscles, which is useful when running away from a sabre-toothed tiger. Unfortunately, this is at the expense of the frontal cortex, which controls rational decisions to select the best outcome.

The muscles that are pumped full of blood and adrenaline are straining at the leash to explode, but releasing them and ignoring all the information available is usually a bad idea. Even in professional sports, we frequently see this – the basketball player who fumbles the ball while under pressure from an opponent or the final penalty in a shoot-out is missed because the player crumbles under the pressure of the crowd and the situation.

Adding mental training into the mix

This is where cohesive coaching really steps in and why a training plan without mental elements can never be fully rounded. Good mental processes are just as important as physical prowess and it is possible to teach the brain to use all of the information available, select the best plan and only then let the muscles unleash all that energy!

Good decision-making processes are important in all sports, whether team or single pursuits and working on them can not only help you decide the best course of action to succeed, but can also teach you how to react when things aren’t going your way. The fear of losing is often a source of pressure, so whether you’ve just gone 2-0 down, fallen off the pace of the leading cycle pack or lost the first set in straight games, being scared of losing can trigger panicked and less rational courses of action, which lead to worse and worse outcomes.

Breaking this cycle, getting rid of unfocused and flustered thoughts and getting back to a cool, rational series of decisions is known as Red2Blue Head thinking and it forms the backbone of how to mentally prepare to return to form when things aren’t going your way.

Every sport around has a tactical element, which means that every sport involves a mental component. Taking a fully cohesive approach involves paying particular attention to skills that don’t strictly relate to training the body, but by boosting them, you could see incredible results! 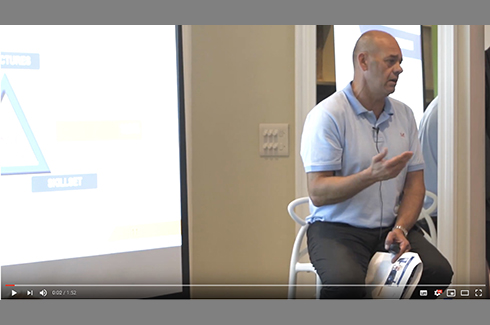 Cohesive coaching requires a mental component
When it comes to developing sustained success in sports, being physically fit is only half…
READ MORE
Fight or flight – instinct or training?
Goal-oriented training can have a marked impact on the nature of decision-making under pressure in…
READ MORE
The Gazing Principle – zoom out and zoom in
Take a step backward to gain clarity in critical moments without losing sight of the…
READ MORE
Embrace the discomfort with Red2Blue
For top performers, pressure can be a stimulant rather than an enemy to performance. Unless…
READ MORE
A day in the life of Vicki Anstey
Fitness professional, entrepreneur and adventurer Vicki Anstey talks about some of the secrets of her…
READ MORE
We use cookies on our website to give you the most relevant experience by remembering your preferences and repeat visits. By clicking “Accept All”, you consent to the use of ALL the cookies. However, you may visit "Cookie Settings" to provide a controlled consent.
Cookie SettingsAccept All
Manage consent

This website uses cookies to improve your experience while you navigate through the website. Out of these, the cookies that are categorized as necessary are stored on your browser as they are essential for the working of basic functionalities of the website. We also use third-party cookies that help us analyze and understand how you use this website. These cookies will be stored in your browser only with your consent. You also have the option to opt-out of these cookies. But opting out of some of these cookies may affect your browsing experience.
Necessary Always Enabled
Necessary cookies are absolutely essential for the website to function properly. These cookies ensure basic functionalities and security features of the website, anonymously.
Functional
Functional cookies help to perform certain functionalities like sharing the content of the website on social media platforms, collect feedbacks, and other third-party features.
Performance
Performance cookies are used to understand and analyze the key performance indexes of the website which helps in delivering a better user experience for the visitors.
Analytics
Analytical cookies are used to understand how visitors interact with the website. These cookies help provide information on metrics the number of visitors, bounce rate, traffic source, etc.
Advertisement
Advertisement cookies are used to provide visitors with relevant ads and marketing campaigns. These cookies track visitors across websites and collect information to provide customized ads.
Others
Other uncategorized cookies are those that are being analyzed and have not been classified into a category as yet.
SAVE & ACCEPT